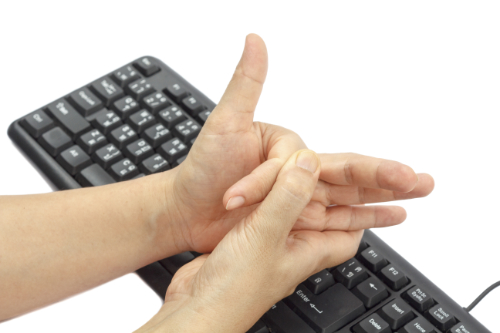 Stenosing tenosynovitis, also known as “trigger finger,” is a repetitive strain injury that is one of the most common injuries in the workplace. It is marked by one finger or thumb that is stuck in a bent position and pops or snaps when straightened. It is caused by an inflamed or irritated flexor tendon.

What are the symptoms of trigger finger?

A person with trigger finger may experience several symptoms in one or more fingers or thumb including:

Some symptoms, like the stiffness, popping, and catching, may be more pronounced after periods of inactivity. The patient may find that upon waking in the morning they have difficulty, but as they move their fingers they loosen and the symptoms aren’t as bad. In severe cases the patient is unable to straighten their finger, even with help.

Many times the cause of trigger finger is not known. They may notice a gradual decline or they may simply wake up one day and experience symptoms. There are certain health conditions and circumstances that put some patients at a greater risk of developing trigger finger:

What are the treatments for trigger finger?

There are surgical and nonsurgical treatments for trigger finger, depending on the severity of the condition. When the symptoms are mild, the patient may be advised to simply rest the finger and take over the counter pain relievers like acetaminophen or NSAIDS to help reduce inflammation and minimize pain. The patient may also wear a splint to better facilitate the resting position of the finger.

In some cases the doctor may advise steroid injections administered directly into the tendon sheath to correct the problem. Sometimes this procedure only provides temporary relief and improvement, requiring a second injection. If the condition is not resolved after the second injection, the patient may be advised to undergo surgery. If the patient has had trigger finger for a long time or if they have a medical condition such as diabetes that is associated with it, injections are not likely to be as effective or a permanent solution.

Some patients undergo surgery to correct trigger finger. The surgery is purely elective since the condition is not considered dangerous. The surgery opens up the tendon sheath, the tunnel that the tendon slides through, so that it moves easier. It is usually done on an outpatient basis.

Instrument based soft tissue therapy may also be used to help reduce tension in the muscles around the area. Chiropractors typically use a whole-body approach to help the patient achieve relief and healing. They recognize that most conditions are not limited to only what appears to be the affected area so they will employ techniques that treat the associated areas of the body as well. This provides the patient with more reliable relief without the use of invasive procedures. Chiropractic is an effective, natural way to treat trigger finger.