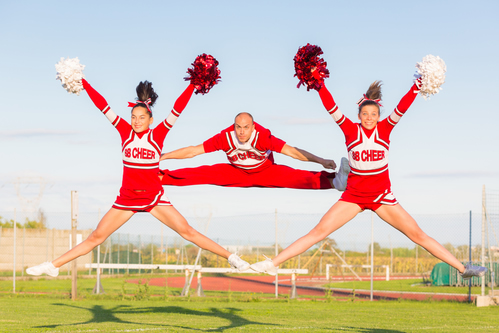 When we think of cheerleaders we usually think of pretty girls in colorful outfits, pom poms in hand, cheering for their team. They are way more than that though. Cheerleaders are serious athletes.

It has taken a while, but the public is finally starting to realize just how true this is. Data collected by the National Center for Catastrophic Sports Injury Research (NCCSIR), between 1982 and 2009 cheerleaders made up for more than 70 percent of catastrophic injuries in women’s college sports. At the high school level that number exceeded 60 percent.

Some claim that this high percentage of injuring among cheerleaders to be due to lax regulations at the state level. Some states refuse to recognize cheerleading as a sport and organizations such as the NCAA don’t either.

This leaves an already potentially dangerous activity without proper oversight of the government or regulating agencies. It also means that some people who manage cheer squads and organize competitions are not required to get the same coaching and safety training standards that those in other sports do.

Since chiropractic treats the whole body through not just structurally via spinal adjustments, but also through soft tissue techniques, patients can receive complete care after an injury and during rehabilitation. Cheerleaders are finding that chiropractic care provides numerous benefits and can even make them better athletes.

It helps to improve range of motion

Chiropractic care helps to improve a person’s range of motion which in turn helps to prevent injury and relieve the pain of injury. Chiropractic is growing in its popularity within the field of sports medicine because of its effectiveness. A 2010 study published in The Journal of the Canadian Chiropractic Association showed that chiropractic made a significant difference in performance.

It helps to prevent injury

Even when no injury is present, athletes can benefit from chiropractic care. This is especially true in high impact sports like cheerleading where athletes push their bodies beyond limits through acrobatics and some of the strenuous tricks that they do in the course of their sport. Chiropractic helps to loosen muscles, making them more pliable and flexible, thus less prone to injury.

It helps to relieve pain from injury

A study published in the Journal of Manipulative and Physiological Therapeutics in March 2011 shows that chiropractic for pain relief can alleviate the pain of hamstring injury. The study was conducted over the course of a football season and involved 43 professional cheerleaders for football various football teams.

Throughout the study the cheerleaders received specific exercise intervention. At the end of the study those who had reported pain due to a hamstring injury experienced significant pain reduction after receiving chiropractic treatment.

It can increase physical strength

While chiropractic is typically considered a therapy for alleviating skeletal and muscular complaints, a study in 2011 showed that it can also improve physical strength. The study involved judo athletes competing at the national level who used cervical spinal manipulative therapy (SMT). The final results of the study showed a 16 percent improvement in grip strength among the athletes who received only three SMT sessions.

The case for chiropractic care for athletes is very strong. It can help during training, recovery from injury, rehabilitation, and at every point in between. Although cheerleaders are still in their infancy of being recognized as serious athletes, the case for chiropractic care as a viable sports medicine therapy to improve performance and recover from injury is significant. The benefits that cheerleaders can receive from this type of therapy, as we can see here, can really give them something to cheer about both on the field and off.